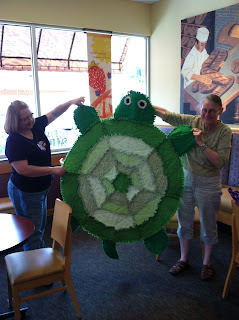 Edith recently joined CGOA and is very interested in participating in the Master Crocheter program. She just recently started coming to 3RC at Panera's.
She brought great thread projects for us to see. I'm so jealous that she is so good at the bullion stitch! From what I saw she'll have no problem getting a Master Crocheter certificate.
She also tats and does quilting. At her last meeting, she brought in a quilted turtle she had made for her grandson. Karen on the left helped her display the quilt. Edith, on the right, looks proud of her work and she should be. Oh, to be so crafty.
Posted by dhalpern3 at 3:49 PM No comments: 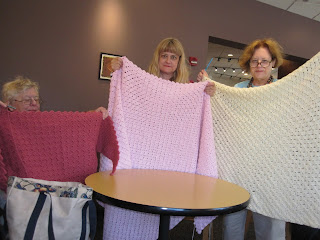 Some stitch patterns seem to come up again and again. This particular stitch seems to have several names: diagonal stitch, crosshatch stitch, and a few more I can't remember. Different people have learned to start the pattern different ways, too. Some start working horizontally and others start in the corner. Starting straight seems to allow for adding a border to the fabric center square, while working from the corner makes its own edging.
At one of the meetings I looked around and found three members all doing the same thing! On the left is Mary with the rose afghan and the edging showing. Then Chris showing off a softer color. Then Ethlyn with the lightest color. Ethlyn just started crocheting and she produced an afghan just as great looking as the experienced crocheters.
I personally find this stitch pattern fantastic for variegated yarns. Because the stitches slant in two directions, the pattern seems to resolve any problems with pooling or lightening strikes. Having this stitch pattern in your repertoire seems to guarantee success. I've seen beautiful jackets by Margaret Huber and Dora Ohrenstein using this stitch pattern.
Posted by dhalpern3 at 10:08 AM No comments: 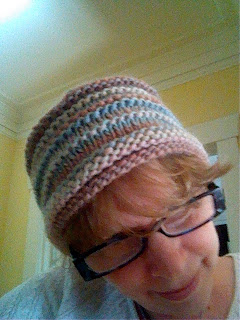 Pat's sister and Randy's aunt lives in Florida. However, she is in assisted living and has been feeling cold and in need of a hat. If you are in Florida in the summer, a warm hat is hard to find.

Randy made this hat for her Aunt Lorraine. The yarn is Chunky Mochi and this colorway seems perfect  for summer in Florida. The design is called Chunky Mochi Dragon Rib Hat by Laura Andersson.

This is Randy's first hat. She keeps expanding her knitting skills and said it was tricky when she got to the top. She always sends important info with her pics, so that someone can track down what they need to make something they saw here. Thanks, Randy.
Posted by dhalpern3 at 11:03 AM 3 comments: 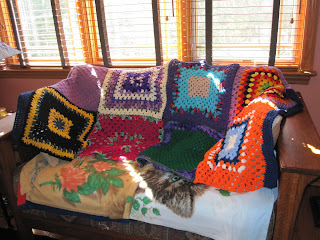 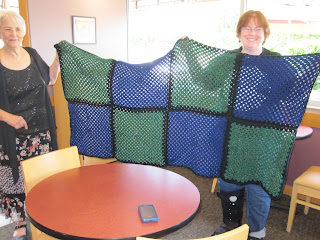 Panels for KtB (Knit the Bridge) were due in by June 1st and these were turned in on time. The panel has squares made by different people. Barb B came to the group special so she could turn in her square. After I put all the squares together in the panel, I added 4" by  crocheting 2" rows on each short end. I knew that the squares came out short on length, but the instructions never said what to do about that. However, it was mentioned that the short length was a problem in one of the KtB emails. So this panel was all right; but most likely someone had to add some length to our other panels. This means that 3RC as a group effort turned in 3 panels.
But Chris A managed to do 3 panels all on her own. This was her final effort, which you can see has been meticulously planned. I like that she'll be able to spot it easily on the Warhol Bridge.
That's the bridge that was finally settled on. It will be covered from early August through early September. More funds are needed and can be donated at Indiegogo.
The railings of the bridge are all going to be covered in black strips. Karen C has made 3 of them and Peggy D one. I'm also finishing up one. I can't get over how absolutely boring it is to crochet a strip 9" wide and 105" long in black.
While other bridges have been covered this is the biggest bridge to be covered so far and should set a world record. Makes sense for the City of Bridges.
Posted by dhalpern3 at 11:40 AM No comments: 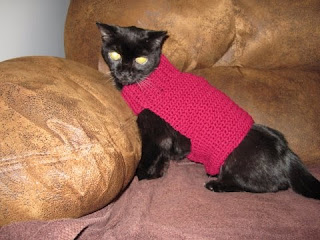 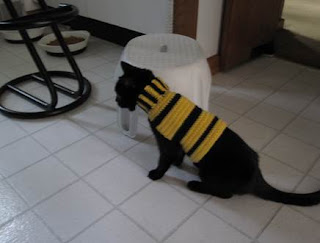 Carol surprised me one day by sending me an email that said"I crocheted a sweater!" I was very excited to see the sweater because I had been encouraging her to branch out since she was showing off all these crocheting skills. What a surprise! A pet sweater! A red sweater on a black cat no less. We shared a chuckle over her pulling this joke on me.
But D.O.G. needed the sweater because she was becoming more frail. In order to keep warm she was hanging out in front of the kitchen refrigerator for the warmth that was flowing out. Carol decided to expand D.O.G. 's wardrobe and made her the sports sweater that everyone in Pittsburgh recognizes as the team colors for everything. (If you are a yarn enthusiast anywhere around Pittsburgh you have yellow and black in your stash.)
D.O.G. was a sweet, loving cat that adored cuddling with Carol. Carol had nursed D.O.G. through several illnesses, but she knew her feline friend just wasn't coming back to health this time. Recently, D.O.G. died and Carol sent her friends a note telling of her loss and how much affection this cat had brought into her life.
My thought was that crochet had allowed Carol to give comfort to D.O.G. when that was all she could do.
Posted by dhalpern3 at 12:21 PM No comments: