Hiya!  Scifi Chris with another 3RC post.  There’s lots going on and lots to chat about.

First is the Good Deeds Day on March 9.  Good Deeds Day is just that, helping out other folks and making the planet we live on just a little bit of a nicer place.  To quote the official website:


“All over the world, hundreds of thousands of people choose to volunteer together and help others, putting into practice the simple idea that every single person can do something good, be it large or small, to improve the lives of others and positively change the world.”  http://jfedvolunteer.org/good-deeds-day-2014


There’s lots of different events and activities going on that day.  Specifically for crocheters and knitters is the event “Act of Loving Kindness.”  Volunteers will be making chemo caps and baby blankets for preemies.  All skill levels are welcome.

Next is the upcoming Pittsburgh Knit and Crochet Festival.  This year’s Festival will be March 14 to March 16, at the Four Points Sheraton in Cranberry.  At the Festival is a vendor’s room, with all sorts of yarn, patterns, and supplies for sale.  Be warned, its easy to go crazy buying yarn, so many temptations.  There are also classes to take, although it tends to be far more knitting classes available than crochet classes.  Registration is on the website, all the classes cost additional fees on top of admission.  The classes I’ve taken have been very informative and lots of fun.  Although I just take one class a day, to have time to do other things, some folks just take classes all day, all weekend.  As it gets closer to the Festival, classes fill up fast.  A few are still open to register at the door, but if you are interested, preregistration is a better plan to make sure you get the classes you want.


On Friday evening, is a free PJ Party with StevenBe, with a competition for “Top 10 Ravelry Shawl.”  See the website for details.  As I discovered last year, its not a party in the sense of music, dancing, and socializing.  Its mostly listening and watching StevenBe’s presentation.  Many folks attend and enjoy it.  On the Three Rivers Crochet facebook page, on January 17, Chris N. posted a description of last year’s PJ party.  To read it, go here https://www.facebook.com/home.php#!/threeriverscrochet and scroll down a bit.


Another event, which requires an additional $10 fee, is the Revolving Trunk show.  Basically, there are garments made from different yarns that you can look at.  Yarn representatives, designers and yarn store owners make presentations and discuss garments and the yarns.  The trunk show runs all weekend and the $10 fee lets you go in as often as you like.


There are some free activities.  All weekend, you can learn how to use a Feltloom in a make it and take it event, no registration needed.  Registration is needed for the free classes teaching folks to knit and crochet.  To register, just go to the website and click on classes.  Nicky Epstein will present a full 18-inch doll display, based on her books: Knit for Dolls and Crochet for Dolls, 25 Fun, Fabulous Outfits for 18 inch dolls.  Over 50 dolls will be on display throughout the entire weekend.  If you just want some quiet time to crochet or knit, stop by Warm Up America Lounge.  You can make a 7 x 9 square, with the yarn provided, that will be sewn together with other donated squares to make afghans for local shelters and families in need.


Here’s the link to the Pittsburgh Knit and Crochet Festival:  http://pghknitandcrochet.com/

For the next bit, I'm totally failing at getting the photos to post on the blog.  I was able to get them onto the Facebook page, so please head over there to see the images.  Sorry about that.
https://www.facebook.com/home.php#!/threeriverscrochet


Finally, there’s always the weekly meetings of 3RC at the Panera’s near Magee Women’s hospital.  All are welcome.  At the last meeting, Diane showed off the sweater she just finished for her grandson.  Its from the Fall 2006 Family Circle.  The pattern is called Easy Crochet Child’s Pullover designed by Gayle Bunn.  It was made with Vanna’s Choice tweed.


Diane also brought along some fabric ruffle yarn, which she found online.  The strips of light weight fabric have holes punched through the fabric on one edge.  The crochet hook goes through the hole.  To make the ruffled scarf, slip stitch three times (once in each hole), then slip stitch through the first stitch.  Diane suggested going on youtube to watch a demo.

Here's some more 3RC folks and projects they are working on.  As a little reminder, we meet on Saturdays, at the Panera's near Magee Womens Hospital, from 2 pm to 5 pm.

The first is Elizbeth, who has been crocheting for just a few months.  She's made some nice projects, including this excellent cable which is in the process of becoming an ear warmer band.  Cables can be very tricky.  Impressive work for a novice crocheter! 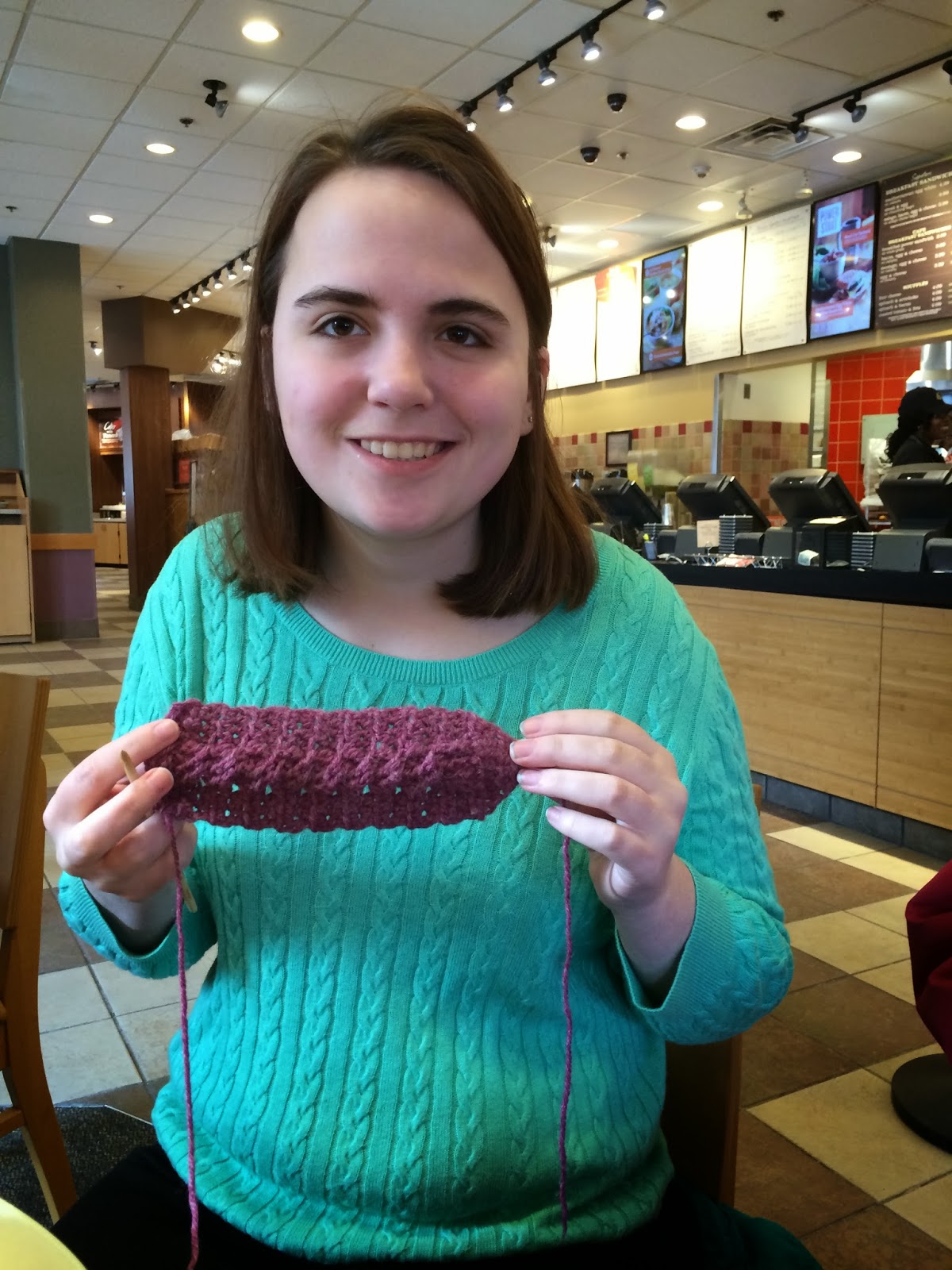 These fingerless gloves were made by Constance, yet another project from a pattern book that has become very popular among 3RC folks,  Crochet One-Skein Wonders.   They are Astra Gloves, designed by Jana Whittle.  There was a significant amount of yarn left over in the skein.  We can't wait to see what project Constance will make out of the rest of it. 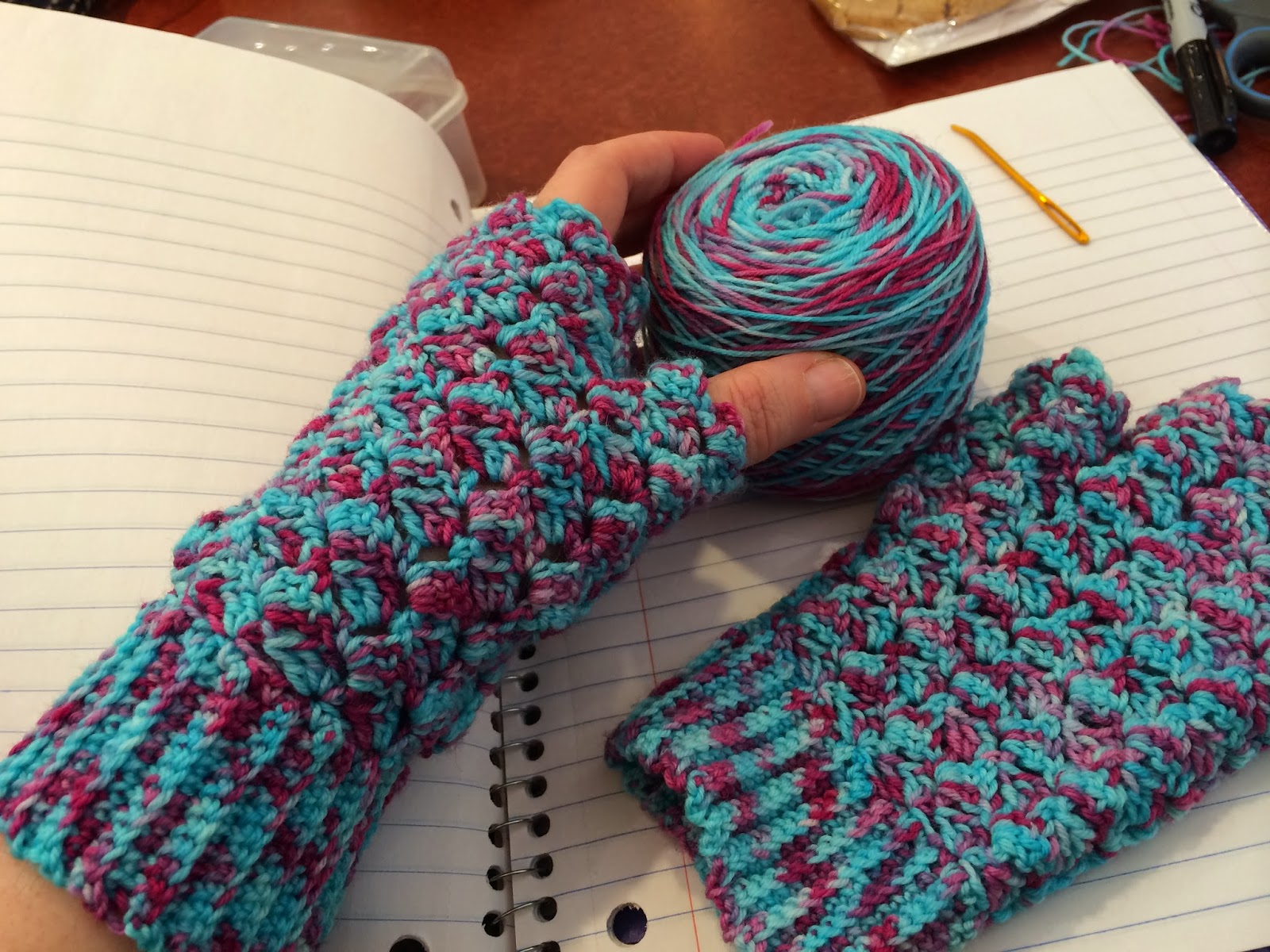 Hiya all!  Sci Fi Chris with another 3RC post.
Several folks in 3RC have gotten entranced with a crochet pattern book Crochet One-Skein Wonders edited by Judith Durant and Edie Eckman.  The book contains a nice variety of different projects and the patterns are organized by yarn weight.


Ethelyn Daniel made some awesome outfits for her granddaughters’ dolls using the Rainbow Doll Ensemble pattern, designed by Gail Tanquary.   She added the extra touch of putting a matching button on each of the hats. 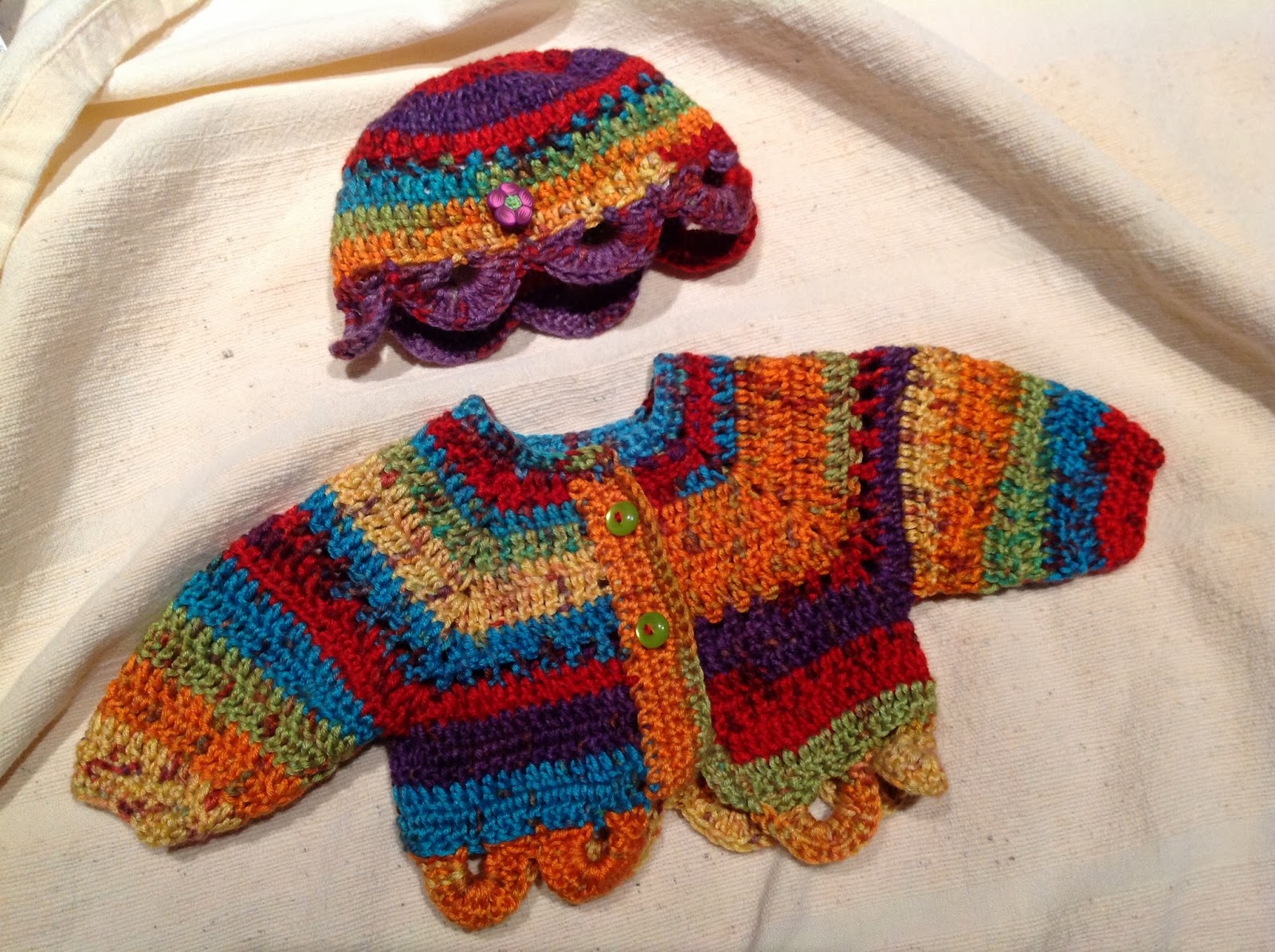 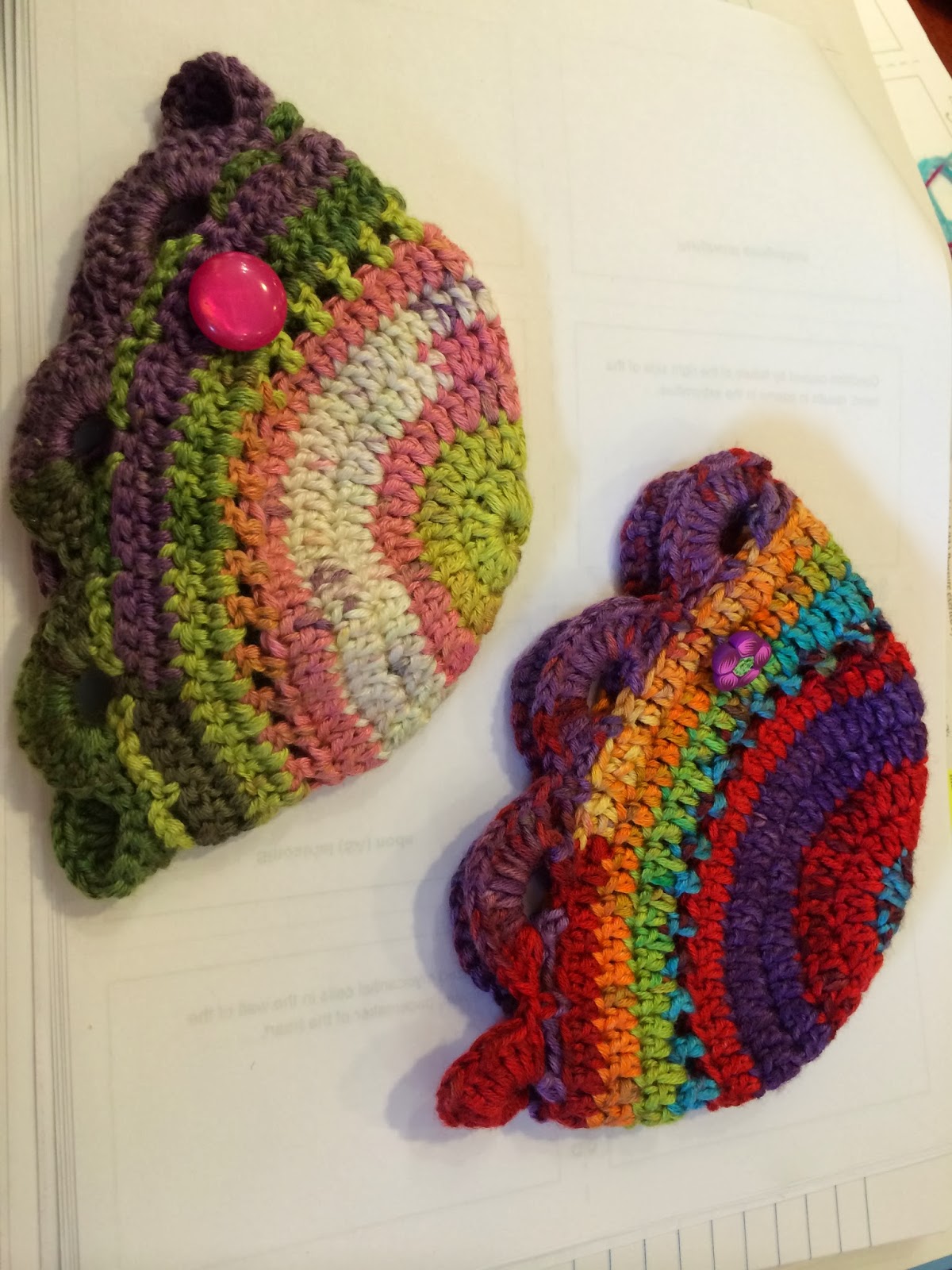 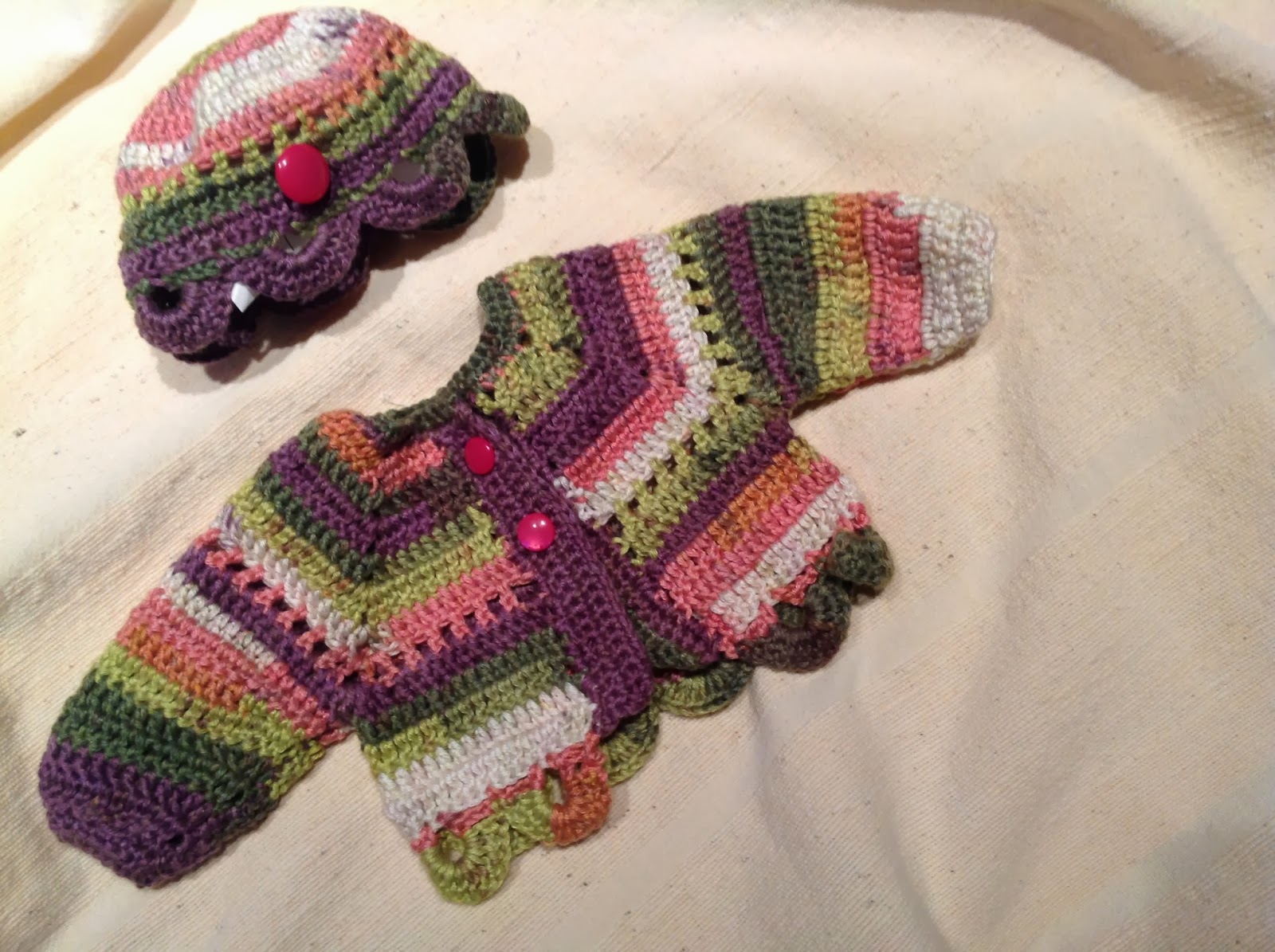 I've had two lives in crochet.  The first life lasted about three years and my crochet paraphernalia sat in the closet for about five years.  I eventually gave away everything.  Crochet came back into my life almost six years ago when I needed to occupy myself while being a passenger on a long car ride.  As I was completing that project my colleague at work, Theresa Gelzinis, asked me what my next crochet project would be.  She asked me if I had ever heard about Project Linus, and the answer was no.  She told me about this wonderful charity and encouraged me to make something for them.  She told me that she could give any blanket that I made to Lyn Billock who would then pass it along to them.

No more than 10 minutes later I walked into my office and the phone was ringing.  It was my daughter-in-law calling to tell me that she had just learned the source of the blanket that our youngest grandson, who was born prematurely, had received at West Penn Hospital in the Newborn ICU.  As you can guess, it was a Project Linus Blanket.  She was aware that I had taken up crochet and asked if I could help pay it forward by making a blanket for this wonderful charity.  The rest is history.


Lynn Billock lived near the home of the local Linus coordinator and thus was the TRC connection for many years.  Several years ago the coordinator position changed; the new coordinator lives close to me.  Subsequently the local Linus Chapter was given the great and generous gift of a suite of rooms at Caste Village Shopping Center in Castle Shannon.  I've had the pleasure of attending several of the Show and Tell evenings at this wonderful location.  There are numerous local volunteers who go there regularly for hundreds of hours annually.  Many of the blankets are quilted and there are tables for cutting the fabric and sewing machines for constructing them.  There are hundreds of feet of shelving for sorting and storing blankets and arranging them for delivery to many locations.  The volunteers not only make the blankets, but organize them, and deliver them.  Last year more than 10,000 blankets were distributed by this local chapter.


I encourage you to check out the web site for the local chapter:
https://www.facebook.com/pages/Project-Linus-Allegheny-Butler-Washington-Westmoreland/147833318740791

The following video features Barbara Sappie who was the original chapter coordinator.  Look in the background of the video interviews to get a peek at the Project Linus rooms at Caste Village:
https://www.youtube.com/watch?feature=player_embedded&v=s0wUKb5_XHQ