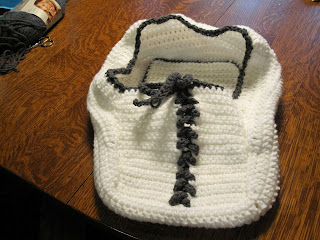 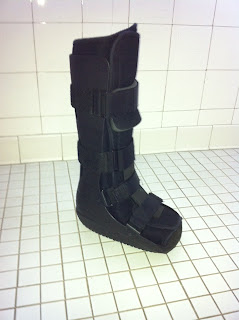 Awhile ago, a gentleman contacted me with a problem. He had broken his leg and he had to wear this boot all the time. He didn't care for the dirt being tracked into the house by the boot after being outside. Could I make a bootie to cover the bottom of the boot while he was inside.
This is just one of the photos he sent of the boot on a tile floor of 2" squares in order to give me an idea of the shape and size.
The bottom of the bootie was doubled and I made a lace up the front to make it easier to get on. I thought the area around the ankle still looked large, so I ran a cord through the top edging. That way he could adjust that part of the boot and just place a knot to hold it.
The gentleman donated $25 to Rwanda Knits in payment.
It seems to me that no one ever gets a plaster cast anymore. 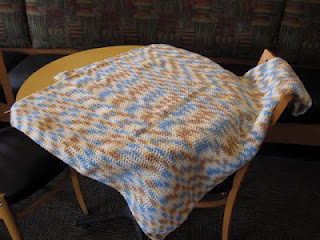 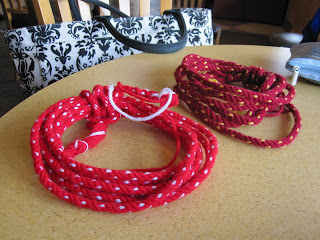 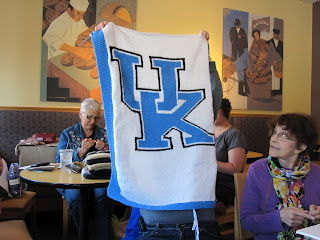 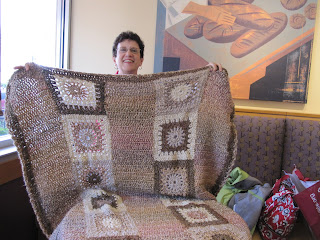 Mary finished up this afghan using variegated yarn and a simple stitch pattern. A great example of how an uncomplicated idea produces great results.

Doug never makes the expected. He wondered of crochet could produce strong rope; he decided that it did. Of course, he used two colors which resulted in an attractive pattern. While very strong, think of the times when you might want to use decorative ties or wraps. Very classy rope.

Theresa made this baby afghan. Yes, it's a baby afghan for a baby boy whose father went to the University of Kentucky. Theresa couldn't find a chart for the logo, so she made one herself. Another unique design from Theresa.

Shelli made this afghan for her daughter. Shelli had made one like it for herself quite awhile ago. Her daughter had always admired it. With her daughter soon to be married, Shelli made one for her in neutrals similar to her own. The design is by Lion Brand and uses Homespun. Shelli hopes the neutrals will go with any decor her daughter chooses.