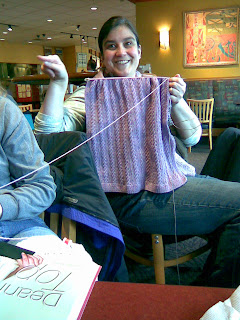 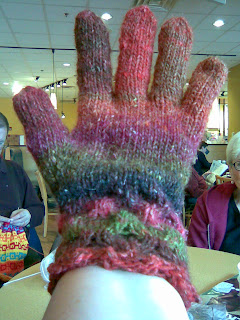 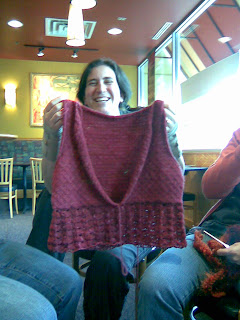 Karen sent me the  photos from her camera phone. I really didn't get as much info about each project  that would satisfy the curiosity of those reading.
I know Karen's knit gloves are a Noro yarn and they are turning out just great.
Becky's top was knitted on the bodice and the "skirt" is crocheted; but I didn't get the yarn or needle size(very tiny).
Lisa is holding up Theresa's panel for a sweater (also knitted).
I feel badly about how many projects I didn't get around to mentioning from Stacy (knitted sox), Lisa (I didn't even get to see what she was working on), and Lynn (a baby blanket). Yogi stopped by to get back into the swing of things after returning home from India.
This is a really busy group. Hope I can learn to keep up with them.
Posted by dhalpern3 at 1:45 PM No comments: 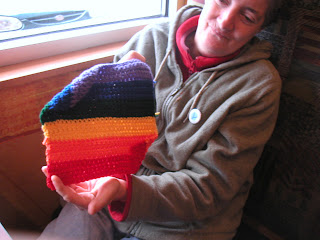 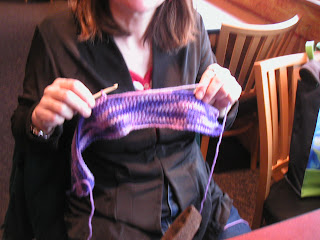 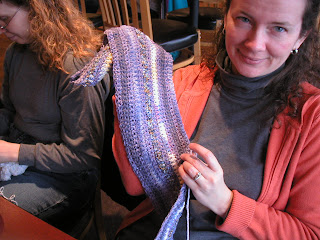 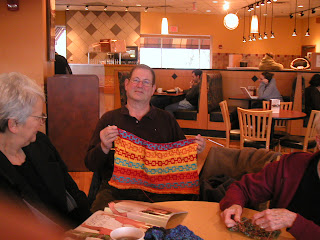 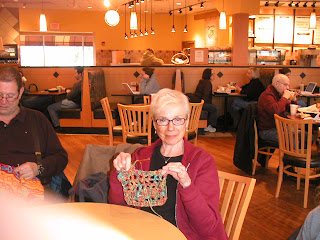 We had a great group this week. Thirteen people in all. Which makes for great conversation and lots of sharing. Like I promised there are pictures of projects; many of them are are personal and not necessarily for charity, maybe just a way of learning. However I managed another technological glitch. He who shall remain nameless powered  up the camera battery for me; I only managed a few pictures when the camera stopped. When I got home "he" discovered that the charger was not plugged in. So we attempted taking pix with phones and emailing them to me. There seems to be a snafu on that and even then I didn't get everyone's projects. Here's today's offerings.
Pat is showing off the beginnings of a scarf in Patagonia from Araucania. The colors are great. At first Pat thought a sweater would be nice but a high price with a short yardage meant a very expensive first sweater. So she is making a one skein scarf and we all feel that this particular yarn makes a better scarf than sweater.
Joe is knitting a throw. (Using slip stitch, which is Dutch to me) When asked what yarn he was using he said a long thin one. Lynn intervened for those who really want to know and named Lion Brand's cottonease. I thought that the colors were vibrant and felt southwest.
Rebecca was making a purple scarf from a sale pack she got at last year's Pgh Knit & crochet festival. It was a combination of yarns put together by Pgh Knit & Bead (now gone) :(  and just shows how attractive several different yarns can work up together.
Chris (sorry about your missing head) was working up a cat blanket for charity which she does frequently. She's also working on putting motifs together into a scarf (a coming attraction).
Roxanne designed this potholder using colors she saw in a piece of material. She never works from instructions and thinks up her own designs for potholders.
If we can't get more pics this week, there's also next week. With so many different tastes and talents you can see why we try for a group project once a year.
Posted by dhalpern3 at 11:52 AM No comments:

Satisfying the need to see a project 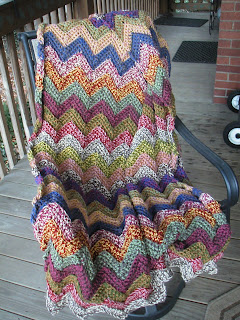 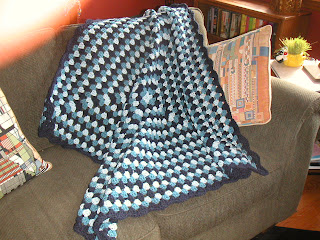 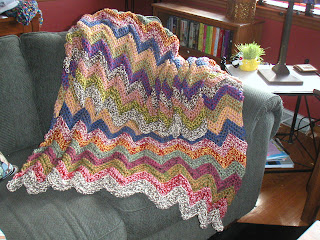 Last posting I said crocheters needed to see some projects. Both projects were worked in Vanna's Choice from Lion Brand. Why that yarn? That's another story. But it's 100% acrylic and has a nice feel. The square is 41" and the ethnic look ripple is double thick and almost 66' long. Unfortunately the colors on the ripple do not show well; they are more vibrant than shown. Both afghans will be available at the lunchtini next February.
Posted by dhalpern3 at 10:15 AM No comments: 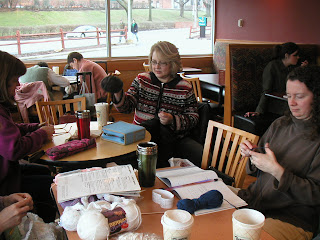 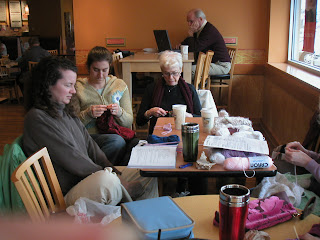 Well I chickened  out worrying everyone would come to Panera's on the 8th and get stuck on the way home in all the snow  that was predicted. I thought I would take a pic on Sunday and show everyone our winter wonderland. However the snow barely arrived and it was so warm on Sunday that there was NO snow to take a picture. I should have known better. The really big snows are never predicted: how else can they cause major mayhem?
But we had a small group on the 15th and I took a few pix. But it dawned on me that I had a real learning curve to achieve here. People watch crocheting blogs to see crocheting (or knitting as is very possible in this group). I took pix of  people, looking very intent and determined with their projects. What projects  you ask? Well I didn't take pix  of those, so there. I do promise to improve.
Once the sun shines again, I will take a pic of the square afghan I made as a door prize (probably for the yarntini lunch). We discussed the project that Jenn S. forwarded to us: huggers for trees. Or as our imaginations ran wild: sweaters for dinosaurs. We really need to find a way to be involved in Pgh's 250th celebration.
Any ideas out there?
Posted by dhalpern3 at 11:52 AM No comments: 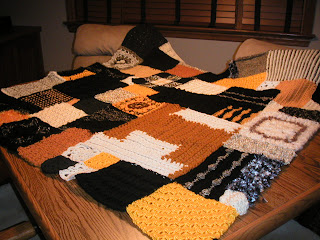 This is the afghan all sewed together but needing an edging. It's amazing that that donated yarn and squares can come together this way.
Posted by dhalpern3 at 2:27 PM No comments: 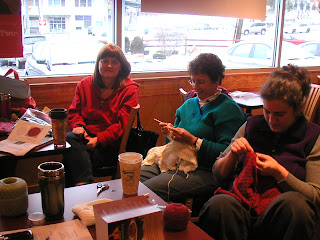 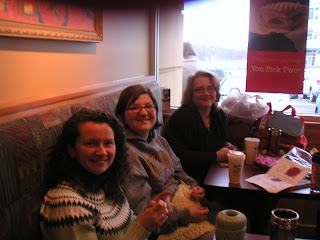 Doesn't everyone look really busy? We still had plenty of time to talk, and laugh and switch yarn from stashes. Which of course led to a description of Theresa's stash even without her there. Apparently words only fall short. Suffice to say that every married woman likes to show the "yarn closet" to their spouses because their personal stashes always fall short. Men's faces pale at the possibility of what their wives' stashes could look like.
How did Pat manage to not get in the picture?
Posted by dhalpern3 at 12:09 PM No comments: