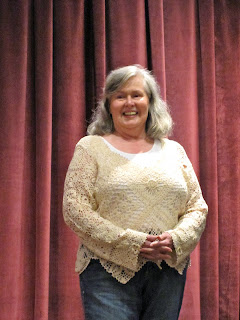 Last week at the CGOA conference I won the Grand Prize in the Creative Design Contest. I won $1000 and was on an adrenaline high for days.
I wore this top at last fall's Yarn Ball. When we all got a chance to go to the Chain Link in Greensboro, I decided to send it in with the idea of winning something in the thread category. Wow, did I get a surprise!
I was not planning to model the top or I would have brought something with me dark. The white top I wore does not highlight the designs in the motifs.
I've never counted the number of motifs in the top. They were all made individually and then put together. I love motifs and how was I ever going to get a chance to make all the ones I liked? So I had the idea you see here. Apparently I like symmetry and it's evident in the patterning. So I got a chance to make 2 of every motif I liked (almost).
I worked on this top over period of a year and a half. I started just making motifs and collecting them until I thought I had enough to start laying them out. My friends called it the "Mythical top" because, of course, I talked about it but no one ever saw it. I was going to call it "An Homage to Myra Wood" because exactly how it got all together is best explained in her book, Creative Crocheted Lace. But I finally went back to my original idea, and named the top "So Many Motifs, So Little Time".
Posted by dhalpern3 at 8:51 AM No comments: 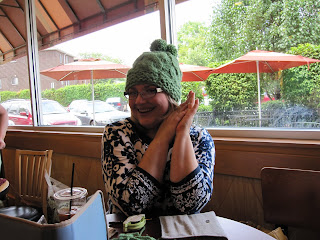 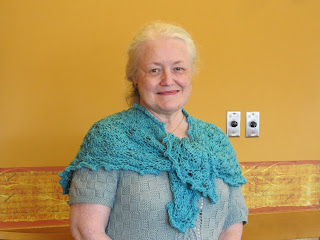 Karen is showing off her hat made from yarn at Highland Alpaca. It was so cute, we encouraged Karen to do a "cute" pose. This hat is on sale at Highland Alpaca (as well as the yarn).
Peggy made this pretty shawl. The color suits her well and the crocheting is just beautiful.
Posted by dhalpern3 at 2:16 PM No comments: 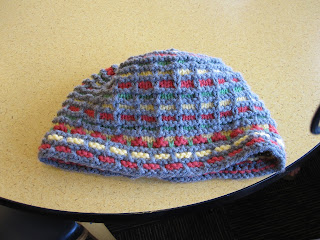 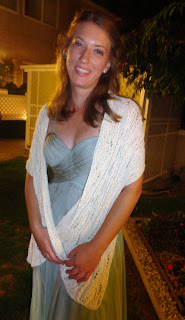 While it may seem that the only thing 3RC members have done this summer is make Special Olympic Scarves, that would be untrue.

As you can see here Amanda was working on her color work skills. She is donating this hat to our Holiday Sales. Right now everyone is starting to think about what to make for the sales, but I am holding back on pictures so all the items can be shown in November right before our sale dates (Dec 2-Dec 10).

This lovely young woman is Amanda's daughter, Cara, on her wedding day. She is wearing a stole made lovingly by Amanda for this occasion. You can see some of the intricacy of the stitches when you look closely. Amanda worked intensely to finish this shawl on time and arrive with it in California. I think it is just wonderful that she can wear this shawl on many other occasions and be reminded of a wonderful day and a wonderful mom at the same time. It's sad to think that not every bride has a wonderful memento made by their own mom. (or perhaps dad)
Posted by dhalpern3 at 10:35 AM No comments: 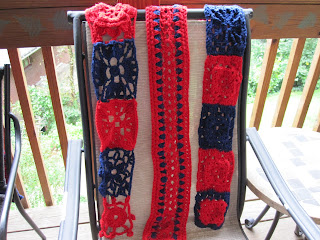 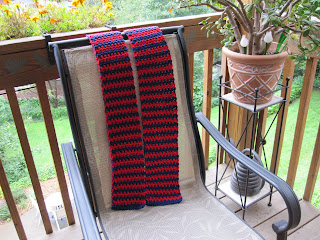 The last few Special Olympics scarves have been collected (with the possibility of one more). As you can see more of the group is trying for dimensional motifs. This is one of the examples of what happens when you belong to a group. You see what someone else has done and then you say. "I think I'll try that, too." 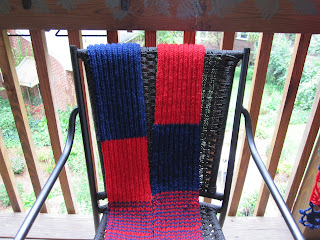 The blue and red striped scarves (kind of makes me think of Waldo) looks knitted but they're crocheted. The knitted scarves have large blocks of color and then a zig zaggy effect.
They've all been washed and tagged, ready to be sent.
Posted by dhalpern3 at 2:02 PM No comments: