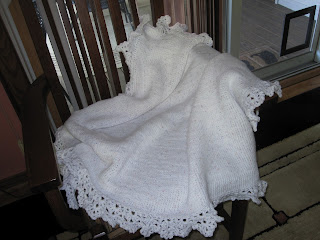 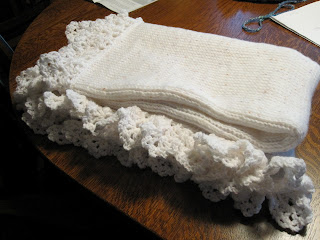 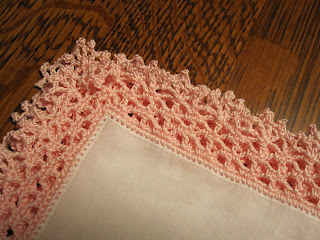 The blanket and handkerchiefs were presents.
The baby blanket was made with Sirdar Snuggly, which I think is the softest acrylic for making baby things. The main part of the blanket was Tunisian knit stitch. I found the edging in an afgan book but I had to rework the basic # of stitches to get the ruffly result. It's was rather close to what I wanted to create.
The handkerchief was worked in size 10 Elizabeth thread on an all ready to go hanky square. I was using a pattern from the 50's that used much finer thread. So once again I had to use some math to get the basic pattern started. I also had to reduce the number of stitches again in the final row because the heavier thread was taking up too much space.
I was initially disappointed in the Elizabeth thread because it had so many breaks in the strands and had lumped up. I had to do a lot of cutting out and restarting with quite a few ends to bury. This particular ball of thread was a freebie. After that I've made other projects using other balls of the Elizabeth thread that was purchased and had no problem. Perhaps just the luck of the draw.
I was very pleased with how these projects turned out.